We are very excited to be a finalist in the upcoming Innovation Tank competition at the Boston Children’s Hospital Global Pediatric Innovation Summit.

Competing against two other finalists, Kevin will make a 4 minute pitch to an impressive panel of venture capitalists, clinicians, researchers and industry leaders.

The judging panel will then decide how to “invest” $30,000 in prize money.

The AIR team is excited to announce that Kevin Cedrone is now working on the AIR device full time. Until now, AIR has been a passion project and part-time effort for its team members. With the generous support of the Saving lives at Birth Partners (USAID, BMGF, KOICA, DFID, Norwegian Government and GCC), the team now has the resources to validate and deploy AIR more quickly and widely than previously planned.

Kevin will be responsible for business development, technical development and Research and Development (R&D). Under the guidance of experienced clinical practitioners, Kevin will also assist in conducting randomized controlled trials of the AIR device in Uganda and Boston.

Before his full time job on AIR, Kevin was an R&D Engineer at Formlabs, a 3D printing company in Somerville, MA. His team worked on better, stronger, faster and more accessible 3D printing. He brings considerable experience in material, mechanical, electrical, optical and software development.

On his recent career change, Kevin says, “I have been working on the AIR device part-time since the original hackathon back in 2012. I am thrilled to be joining full time. We have a very compelling solution to improve ventilation training. I’m looking forward to helping accelerate its deployment!”

Our team iterates. Iteration lets you to test assumptions and improve through feedback. It can be humbling to receive honest feedback, but feedback and subsequent iteration is the best way to converge on a successful design.

Ben Einstein, the co-founder of the Bolt Hardware Accelerator described it well:
“A good company builds one product, learns from its customers, and iterates to make that product exceptional. Each step in the process is designed to refine a product and find the often elusive “product/market fit” that is the basis for all successful startups.”

Our design process is similar to HUMAN CENTERED DESIGN. The IDEO HCD framework has 3 steps: Hear, Create, Deliver. We break it down into a few more steps: Ask, Listen, Design, Test, Improve.

Between the original problem, and a successful product that creates impact at scale, one must distribute, iterate and scale-up the successful design.

Our product design cycle bridges the gap between the original problem, and a successful solution creating impact at scale. The “design loop” is repeated several times between steps:

Three of our prototypes showing the refinement in form and function as we have iterated on our design.

At the original hackathon, the technical team delivered prototypes to the medical team. At first the prototypes were block diagrams or quadrant maps on scratch paper. Eventually those prototypes were refined enough to commit them to hardware (and software). The team continues to refine its prototypes, but in a joint co-creative manner, rather than the technical-producer, medical-consumer roles of the hackathon.

The key skill is a willingness to seek, accept and incorporate feedback. Feedback can be destructive, but ultimately you want to destroy weak aspects of your design. Destructive feedback is how you make progress.

We are about to engage in randomized controlled trials that will:

We look forward to improving our design so that we can improve our product to create impact at scale. 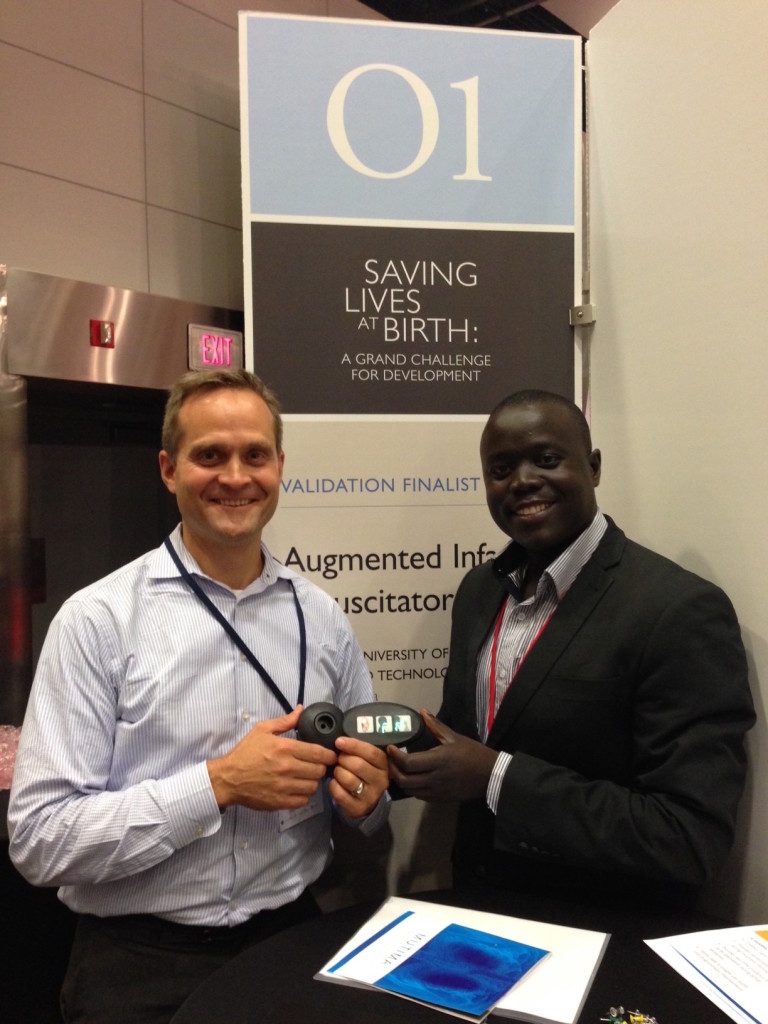 Dr. Data Santorino and Dr. Kristian Olson with a 3rd generation prototype at the Saving Lives at Birth Development XChange.

In October 2012 Dr. Santorino Data took the microphone and made a 60 second pitch to a group of engineers, designers, clinicians and entrepreneurs who gathered at the CAMTech H@cking Medicine Hackathon at Massachusetts General Hospital. It was not an elevator pitch in the traditional sense, but holding a conventional bag valve mask (BVM) resuscitator, Dr. Data described its use in training. He distilled his vast experience with neonatal resuscitation and training frontline care providers into a problem statement: despite improvements to and increasing availability of training and equipment, many infants still die preventable deaths due to breathing problems. Trainees successfully complete training, yet often fail to provide adequate ventilation in the field.

Dr. Data asked for some way to passively log time and date-stamped data to objectively audit care providers and the root cause of newborn death related to breathing trouble at birth. Why did this baby die? Was the provider’s technique timely and correct? Had their skills atrophied since initial training? Was the resuscitation equipment functioning properly? Was this baby simply (and tragically) too sick to save?

It is a rare thing to have an expert like Dr. Santorino Data in the room. Leaders within the American Academy of Pediatrics (AAP) have stated that Dr.Data has trained the most people in the Helping Babies Breathe program globally. This vast experience gave him insight into the challenge of preventing newborn deaths and complications due to breathing problems.

After his pitch, and many other compelling pitches from other clinicians, entrepreneurs and engineers, teams formed to work on the ideas, or generate new ones for successive rounds of pitching, ideation, and prototyping.

Dr. Data’s problem attracted two engineers none of whom had met before the event. Dr. Data also attracted the interest of an MGH clinician-educator Dr. Kristian Olson.

Craig, Kevin and Data working at the original hackathon.

The engineers included Craig Mielcarz, a freelance electrical engineer with a strong background in prototype development of consumer electronic and medical devices and Kevin Cedrone, then a mechanical engineering PhD student studying automotive engine combustion. To Kevin, the problem of measuring and diagnosing ventilation quality resembled the a similar and routine task he faced in the engine lab. In what may be considered a callous engineering analysis, the inhalation and exhalation of a newborn struggling to breathe has much in common with an engine that aspirates a fuel-air mixture and expels hot post-combustion exhaust. Armed with MIT education, and free coffee at the Hackathon, Kevin and Craig went on to flesh out their mental model infant resuscitation: how it should work, and what typically goes wrong when it does not work. The main problems of ventilation, as one may guess, or find out from experts like Dr. Data and Dr. Olson are:
1. Poor seal between the bag-valve-mask interface
2. Blockage in the airway (due to secretions, poor airway alignment, etc.)
3. Incorrect rate of ventilation (usually too fast)
4. Insufficient volume and/or pressure to inflate the lungs

Kevin and Craig proposed a simple, low-cost device that could be added to the flow path of existing BVM equipment to observe the quality of ventilation technique. Before building such a device, the team pivoted. Rather than simply record ventilation efforts for literal post-mortem analysis, the same device could, with very little modification, provide real-time feedback during resuscitation. Instead of waiting for the worst possible outcome, the death of a newborn, to trigger corrective action like bringing a birth attendant in for retraining, or finding and fixing faulty equipment, why not give live guidance, exactly when it matters most?

That evening, the engineers hatched a scheme to build a proof-of-concept prototype. Overnight, Craig and Kevin combined ventilation tubing from MGH, some sensors Kevin had saved from the trash can in the Sloan Automotive Laboratory at MIT, and an Arduino with a custom algorithm. Two low-cost measurements were enough to make a high-value judgment about the quality of ventilation.

With a working prototype, the team pivoted again. The team recognized another potential market and purpose of the device. Why wait until an emergency intervention to give feedback to caregivers? Why not make this device available during training. Give trainees objective feedback on their technique as early as possible, and as often as possible. Give trainees a device to take with them so they can continue to practice when the stakes are low, so they are ready and able to give the highest quality ventilation in as timely a manner as possible.

The team presented their hack to a panel of judges and won first prize for best prototype and best overall innovation, including a demo of the ugly but fully functional proof-of-concept prototype. 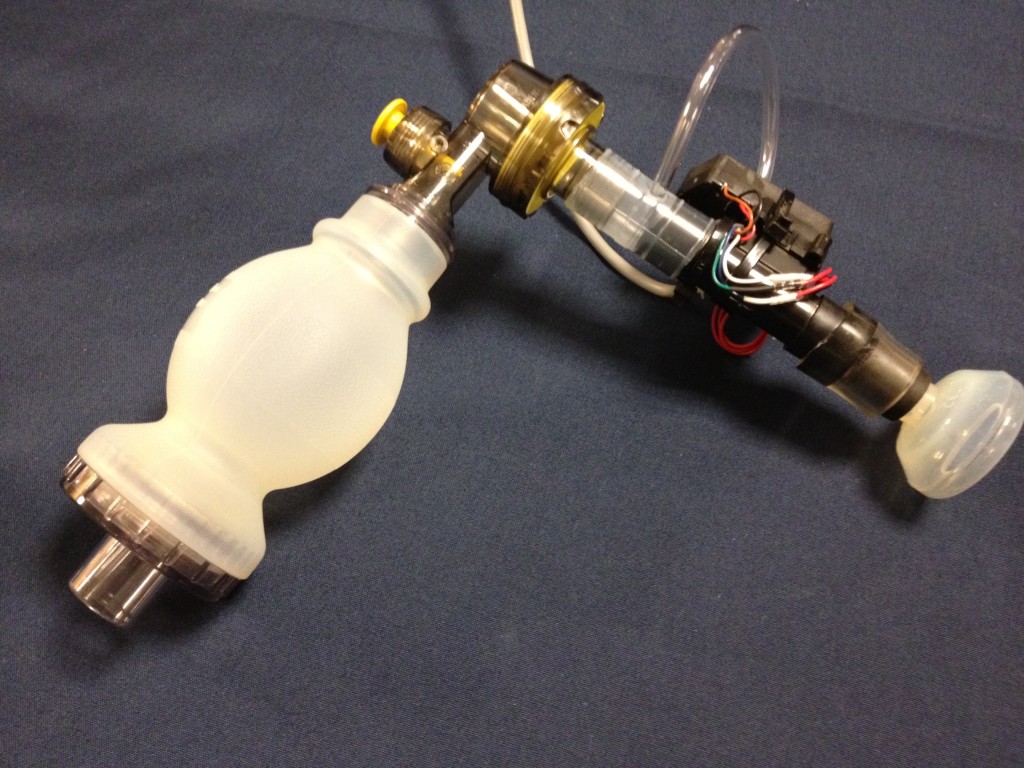 The original proof of concept prototype installed in the air path of a Laerdal bag valve mask.